Andrew Shute, Senior Vice President, Global Field Operations
A closer look at the current scenario of cardiovascular diseases reveals that around 25 million people worldwide suffer from heart failure. The most effective treatment option for the past two decades has been Cardiac Resynchronization Therapy (CRT). CRT uses an implantable pacemaker that has leads connected to it, which deliver small pulses of electricity to regulate the rhythm of the left ventricle (LV) of the heart. But this conventional method of using pacing leads in the therapy brings a series of lead-related complications, including lead failure, lead dislodgement, and infection at the implant site, among others. Besides these complications, as per statistics, close to 30 percent of patients don’t respond to the conventional CRT treatments, which reduce the viability of this treating device and technique.

Offering a beacon of hope, EBR Systems is transforming the conventional pacing technology with its innovative leadless CRT system. The company is on a mission to eliminate pacing leads and deliver top-of-the-line, reliable, and patient-specific treatment for cardiac rhythm diseases that would significantly help patients unable to benefit from the traditional CRT.

“We have developed the first wireless endocardial pacing system for heart failure that can be implanted in any favorable location inside the left ventricle to offer tailored pacing therapy to patients,” mentions Andrew Shute, Senior Vice President, Global Field Operations of EBR Systems.

EBR Systems’ WiSE CRT system is a leadless, customizable, and endocardial (inside the LV) therapy. It uses an electrode of the size of a rice grain, a battery, and a transmitter. The electrode is placed at the preferred location, and the ultrasonic transmitter is implanted in the intercostal spaces that fires a beam of ultrasound at the electrode, which is converted into electrical energy to pace the heart.

This system also enables cardiologists to deliver custom-tailored therapy as it enables them to place the device in the most favorable pacing location in the LV as per the patient’s medical requirement, rendering the best possible outcomes. Besides, it works seamlessly with the previously implanted pacemaker or any co-implant device that paces the right ventricle. WiSE paces the LV at the same time as the right side to restore the heart’s synchrony. The WiSE CRT System is already approved in Europe, while EBR Systems is performing an IDE study in the US.

With the aim to bring further innovation, in the last 12 months, EBR has been focusing immensely on another specific area, left bundle branch area pacing (LBBAP) to achieve a more physiological technique. Instead of pacing in the heart muscle, this approach utilizes the heart’s native wiring or conduction system and directly paces this wiring system. To enhance the procedure, EBR Systems is striving to offer leadless LBBAP with its WiSE pacing technology. “We recently did the first ever wireless left bundle branch area pacing case early this year, which has been a major milestone for us,” mentions Shute.

In response to the innovations, EBR Systems was awarded breakthrough technology status by the FDA, whereby they could renegotiate the design of their clinical trials. This helped them move from a randomized to a single-arm design.

Giving a glimpse into the future, Shute expects to complete the enrollment for the CRT study in the US by the middle of 2022. They would continue working on the complete leadless CRT and build on this clinical experience. Further, adding to the revolutionary enhancements in the market, EBR Systems is developing a rechargeable battery for their leadless system, which is likely to be the first-ever in the cardiac rhythm management or pacing industry.

“We envision being leaders in lead-less pacing and offer first-line therapy for all patients—unresponsive patients to conventional pacing therapies and others as well,” concludes Shute. 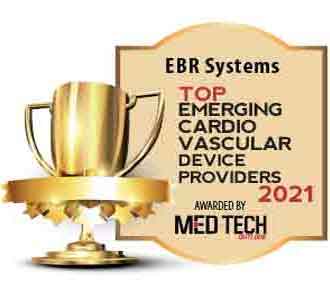 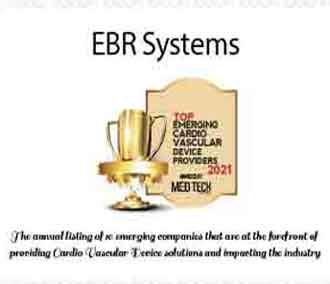 Description
Delivers superior treatment for patients suffering from cardiac rhythm diseases by developing safe, clinically superior, cost-effective and reliable therapies using wireless cardiac stimulation. The company is on a mission to eliminate pacing leads and deliver top-of-the-line, reliable, and patient-specific treatment for cardiac rhythm diseases that would significantly help patients unable to benefit from the traditional CRT. EBR Systems’ WiSE CRT system is a leadless, customizable, and endocardial (inside the LV) therapy 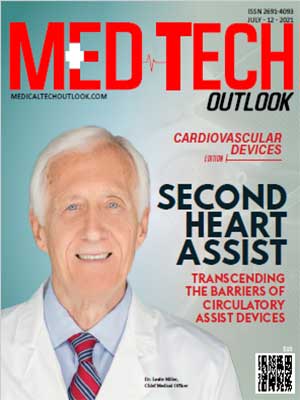